Repair Café creator Martine Postma (second from left in photo) has won the 2022 Leopold Kohr Prize. The prize was awarded on Sept. 9 in Salzburg, Austria. The Leopold Kohr Prize is awarded every three years to people and initiatives that strive for a sustainable world in which self-reliance and the human scale are central issues. The award is named after the Austrian economist and philosopher Leopold Kohr and emanates from the Leopold Kohr Akademie, affiliated with Salzburg University.

“Repair Cafés are building blocks of a sustainable, resource-saving lifestyle and a future-proof economy in the sense of Leopold Kohr’s philosophy”, reads the certificate accompanying the award.

‘Repairing has become a lifestyle for many people’

Among those present at the award ceremony were the rector of Salzburg University, the deputy mayor of the city and the vice governor of Salzburg Province. “Your contribution to sustainability and meaningful reuse is bearing fruit worldwide. Repairing instead of throwing away has become a lifestyle for many people”, said vice governor Heinrich Schellhorn (pictured in the middle next to Martine). 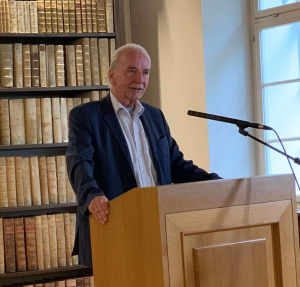 Sepp Eisenriegler (pictured left), Austrian repair advocate and founder of the Reparatur- und Service-Zentrum, was invited to deliver a laudatio in Martine’s honor. “Repair is the king of reuse strategies”, he said. “Martine recognized that in 2009. Not only did she conceive of that, she put it into action. The fact that there are thousands of Repair Cafés worldwide today is because of her and no one else. That’s why she deserves this award”, Sepp said.

In her acceptance speech, Martine in turn praised the tens of thousands of Repair Café volunteers. “I think it’s fantastic that so many people are willing to volunteer to help neighbors repair broken things and preserve and pass on repair knowledge. Together we are forming a global movement of people who have had enough of throwaway society and show that things can be done differently.”

A sum of ten thousand euros is attached to the Leopold Kohr Prize.