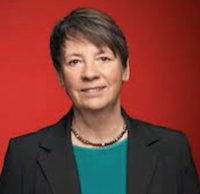 Europe must actively promote repair as an alternative to throwing away and buying new goods. That is what the German Federal Minister for Environment, Barbara Hendricks, said on April 7 at the European Forum on Eco-Innovation in Hannover. In her opening speech, the Minister mentioned the Repair Café as an example of what Europe needs in order to achieve a circular economy.

The forum took place on the grounds of – and at that same time as – the Hannover Messe, the largest technology exhibition in the world. According to Hendricks, no better location could have been found.

Guest speakers from all over Europe came to Hannover to talk about the work they do to try and create a circular economy in their local area. Thus, the Swede Pål Mårtensson talked about the Kretsloppsparken in Gothenburg.

Appealing and easy
Discarded goods that are still usable are sold at second-hand shops located at this novel recycle park. Building materials such as doors, wooden planks and even toilets, can also be bought and taken home by visitors. “Kretsloppsparken makes recycling easy and appealing”, Mårtensson said.